Skip to main content
Operating Status loading...
Office of Human Resources
To recruit and retain a highly skilled and diverse workforce for the NIH.

What Can I Apply For?

At NIH we understand that applying for a federal position can be confusing. The following is information to help you, the applicant, navigate the federal personnel system as you pursue a career in the Federal service.

What are Hiring Paths?

When applying to a position through USAJOBS, be sure to review the Hiring Paths and the Clarification from the Agency statement to determine if you are eligible to apply.

Below is an example of a position that is open to the general public.  Each announcement is different and some will contain multiple Hiring Paths. 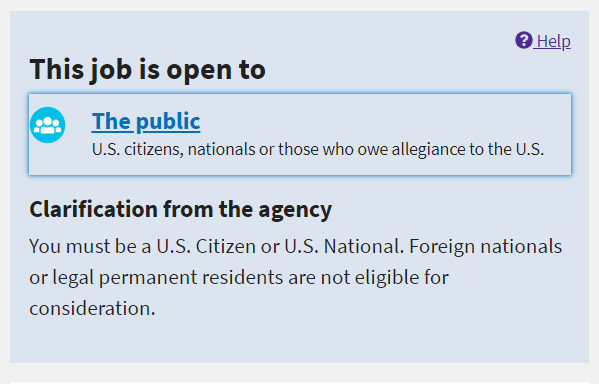 What is General Schedule?

In the Federal GS classification system, "occupational groups" consist of related occupations grouped together numerically within the same multiple of 100. Under each group are a number of "occupational series." For example, "GS-600" is the Medical, Hospital, Dental, and Public Health Group. Included in this Group is the Nurse Series, GS-610, the Pharmacist Series, GS-660, and the Environmental Health Technician Series, GS-698.

An interdisciplinary professional position is a position involving duties and responsibilities closely related to more than one professional occupation. For example, the duties of a position assigned research work in the environmental responses of certain living organisms may be accomplished by an employee trained in either biology or physiology. Thus, the position could be classified to either the General Biological Sciences Series, GS-401, or to the Physiology Series, GS-413.

Examples of an occupational series in a job announcement

This position is classified under the General Schedule, as indicated by the "GS". The occupational series is 0601, which is in the Medical, Hospital, Dental, and Public Health Group, GS-600. The grade level for the position is a GS-14.

This position is also classified under the General Schedule, as indicated by the "GS". The occupational series, 1102, is the Contracting Series, under the Business and Industry Group, GS-1100. This example is being offered at the GS-09 and GS-11 grade levels.

What is the Federal Wage System?

The "Federal Wage System" (FWS) is the classification and compensation system for trades and labor occupations in the Federal government. A "Job Family" is a broad grouping of occupations related in one or more ways such as: similarity of functions performed, transferability of knowledge and skills from one occupation to another, or similarity of materials or equipment. For example, 4600 is the Woodwork Family and 5000 is the Plant and Animal Work Family. An "occupation" is a subgroup of a job family that includes all jobs at the various skill levels in a particular kind of work. For example, 4607 is Carpentry and 5048 is Animal Caretaking. The Office of Personnel Management's Handbook of Occupational Groups and Families (PDF) describes each job family and occupation.

Example of an FWS occupation in a job announcement

How are Position Titles Used?

Generally, the Office of Personnel Management (OPM) prescribes official position titles, which must be used on official documents relating to the position, such as position descriptions. However, agencies may, in addition, choose to use unofficial titles that better describe the duties of the position, for purposes such as recruitment.

OPM has prescribed certain parenthetical titles to be used for some occupational series. Parenthetical titles are also used when it would be helpful to further identify the duties and responsibilities involved. In addition, a parenthetical title of Typing, Stenography, Office Automation (OA), or Data Transcribing, must be added to the official position title if the duties require proficiency at or above competitive level standards for one of these skills. For more information, see OPM's Introduction to the Position Classification Standards (PDF) .

The "General Schedule" (GS) is the general classification and compensation system for white collar federal jobs; the pay scale contains 15 grades and 10 steps within each grade. (For salary information, visit the Office of Personnel Management's pay tables .)

Normally, if you are just starting out, you can qualify for jobs at the GS-2 level with just a high school diploma or as little as 3 months of general work experience. At GS-3 and GS-4 levels, you can qualify with more months of general experience. Starting at GS-5, jobs generally require one year of specialized experience to qualify. When you have a degree but no specialized experience in a career field, you are eligible for appointment at the GS-5 pay scale. To qualify for jobs at the GS-7 and higher grades, your background must have included experience closely related to the work to be performed in the job for which you are applying. You can qualify for some GS-9 and 11 positions on the basis of education if the education provided you with the knowledge, skills, abilities to perform the duties of the job.  For some research-related positions, you may qualify up the GS-12 with a Ph.D. in a related field.

How Does Veterans Preference Work?

Veterans' preference in its present form comes from the Veterans' Preference Act of 1944, as amended, and is now codified in various provisions of title 5, United States Code . By law, veterans who are disabled or who served on active duty in the Armed Forces during certain specified time periods or in military campaigns are entitled to preference over others in the competitive hiring process and also in retention during reductions in force. Preference applies to most, but not all, announcements in the competitive and excepted service.  Many veterans are also entitled to be considered non-competitively (i.e., appointed without applying to an announcement) and the ability to apply for certain positions announced under merit promotion procedures. Veterans’ preference laws assist veterans in the hiring process, but they do not guarantee employment.  For more information, please visit the Office of Personnel Management’s VetGuide.

What are Appointment Authorities?

There are several mechanisms for appointing an individual to a career or career-conditional appointment. Permanent federal career status is automatically gained upon completion of the mandatory three-year career-conditional period. If the Office for Personnel Management determines that there is a severe shortage of candidates or a critical hiring need, an Agency may use direct-hire authorities to appoint candidates directly to jobs. Some appointments allow an employee to be converted to a career-conditional appointment noncompetitively including the Pathways for Students and Recent Graduate Program, Presidential Management Fellows Program, and Schedule A appointments.

If the Office for Personnel Management determines that there is a severe shortage of candidates or a critical hiring need, an Agency may use Direct Hire authorities (DHA).

A DHA does NOT require:

DHA almost functions like the private sector when recruiting.

*This authority may only be used if the position is classified using no other specialties or parenthetical titles other than “Information Security or INFOSEC.”

**Review our Guidance on Business Related Coursework for the GS-1102 Contracting Series to determine if you meet the education requirements.

The Schedule A Appointing Authority allows qualified people with physical disabilities to obtain employment in positions consistent with their level of skills and abilities. After completing two years of satisfactory performance, employees may be converted to appointments in the competitive service.

Can we make this page better?